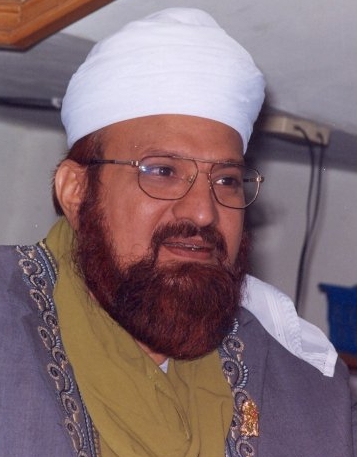 Allama Kaukab Noorani Okarvi (Born 17 August 1957) is an Islamic scholar, researcher, orator, writer and cleric of Ahle-Sunnat Wa Jamaa’at Sunni (Barelvi). He is known as Khateeb-e-Millat (“Orator of the Nation”) by his followers. He is the son of Khateeb-e-A’zam Muhammad Shafi Okarvi (رحمۃ اللہ علیہ).

Okarvi was born in Karachi, Pakistan. Before his birth in a family of eleven brothers and sisters, His two eldest brothers had passed away.[citation needed] He is from a business family of Yemani Shaeikhs which converted to Islam due to Abu Bakr.[citation needed] The members of his family came to India for business and settled there hundreds of years ago. His elders were mostly businessmen by profession but personally they had spiritual temperament in nature.

In his book, Deoband to Bareilly he writes, “To tell you the truth, I am a mere seeker of knowledge in the fields of religion, spirituality, and scholastic matters. This little bit recognition of letters and words and the skills of experimenting with them that have come to me, it is mostly because of my environment which was due to my kind parents, paternal grandfather, maternal grandmother, teachers and holy people. These revered and respected personalities have guided my learning at every stage of my life.”

Okarvi’s early childhood was spent in Okara, Pakistan. He received his early religious and worldly education at Jaami’ah Hanafiyah Ashraf-ul-Madaaris in Okara. He memorized the Quran at the age of eleven years, taught by Muhammad Abdul Lateef Amjad Sa’eedi.

He was admitted to the second grade in Government Boys Primary School. He lead the assemblies with Qira’at and Na’at. In middle school he organized a competition of Qirat and Na’at for children.

In 1962 he became the secretary of Bazm-e-Adab and later became its president. During his school and college days he participated in various debates, Qirat and Na’at competitions and also received prizes for it.

During that period he developed love for poetry and literature. At the age of 13 he established an organization of students and youth called “Bazm-e-Shaaheen Pakistan”.[citation needed] Its main purpose was to inculcate religious principles, support poor students, and organize competitions of Qira’at, Na’at and speeches and to celebrate Islamic festivals.[citation needed] He also took leave from the school for one and a half years so he could memorize the Qur’an. In 1957 and 1971, during the war between Pakistan and India, he collaborated with the National Defence and Boys Scouts. In 1971 he passed his matriculation examination from Government Boys Secondary School, P. E.C.H. Society Karachi. In 1973 he passed his intermediate examination from Government National College, Karachi and he was awarded his advance degrees. He later travelled out of Pakistan to take his Ph.D degree in Economics.

Okarvi is the second manifestation of Shayr-e-Rabbaani’s glad tidings which was given to his grandfather by his Shaiekh. In 1964 he received discipleship in Salaasil-e-Tareeqat on the holy hand of Ghaus-e-Zamaan Ganj-e-Karam Peer Saiyyid Muhammad Ismaa’eel Shah Bukhaari known as Karmaa Waalay. Later he received discipleship of blessing (Baie’at-e-Tabarruk) on the hands of Saiyyid Ahmad Saeed Kaazimi and from the family of Ghaus-e-A’zam from Peer Saiyyid Taahir ‘Alaa-ud-deen Geelaani. He has permission and caliphate in all the (chains of all the sects of the Soofee’s) from many saints of the Arab and non-Arab world. Okarvi’s disciples are all over the world.

Okarvi’s teachings are not confined to institutions or classrooms. To students of all ages, he lectures in large congregations of thousands of people. He often travels to far off villages and cities, during cold bitter nights and warm summers where people gather to listen to his speeches.
The medium of his teaching is through speeches, television, radio, computer, books, magazines, and newspaper.

He started writing a newspaper column at the age of eight years. In 1967 his first radio program was broadcasted. He received ten rupees for a show and in 1969 he appeared on television, for which he received twenty rupees for a show. To date, three thousands of his shows have been telecasted. In twenty eight years after the departing of his beloved father he has only been able to thoroughly explain seven parts of the holy Qur’an, due to his research in each topic in the Friday congregation in Jaame Masjid Gulzar-e-Habeeb, Karachi.

His live and recorded shows are broadcasted regularly from many TV channels in Pakistan. In many foreign countries like the Middle East, Africa, India, U.S.A, U.K and Bangladesh his television shows are telecasted. He is interviewed by many prominent TV personalities on different magazines, newspapers.

When asked why he has no interest in politics, he replied, “I can’t lie, I don’t like hypocrisy and breaking promises. I don’t want to gather bad prayers (du’aa) of the people. There are only two topics of my life: purity and sincerity. Everything which is pure; it is good. People should not sit idle they should work and stay busy. I demand perfection and quality in everything. Whoever’s work it may be it should be good.” When asked how he developed his humor he replied, “Gham Sehh kar Hansna Hansaana Aa gaya” (“I learned to laugh and make others laugh after enduring pain”).

He has said: “My first love was with books. At the age of six years I started collecting them. Up till now my personal library has a collection of over 50,000 books.”[10] These books are in Arabic, Persian, English and Urdu languages. They are of a wide variety of topics including Islam and all its teachings, Urdu literature, fiction, science, history and general knowledge.[10] Some of his books are used as reference texts by students and scholars.

Orator of the Nation 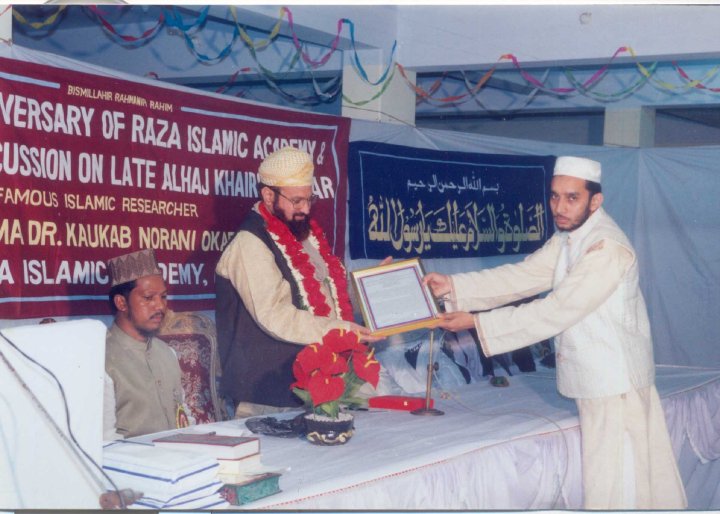 He has been called “Khateeb-e-Millat” (Orator of the Nation) by majority of his admirers and followers. He wanted to become a researcher and a professor but his father wanted him to become a religious and spiritual scholar like him. Therefore, initially part-time and then in 1984, after his father’s death, Okarvi started giving formal orations and teaching.

He started the Imaamat and Khitaabat of Jum’ah in the Jaame Masjid Gulzar-e-Habib, Gulistan-e-Okarvi (Soldier Bazaar) Karachi which still continues. Okarvi has been leading the Friday prayers and also explaining in detail the Holy Qur’an. Sometimes it takes him three to four months to conclude a certain topic of Qur’an owing to his wide spread research oriented knowledge. On every holy night, Muharram, Ramadan including Jum’atul Wadaa and Laielatul Qadr his passionate speeches are heard by many believers.

Since 1984 Okarvi has been the chairman of Gulzar-e-Habib Trust. Under its management the Jaame Masjid Gulzar-e-Habeeb, Jaami’ah Islaamiyah Gulzar-e-Habeeb and Masjid Noor-e-Habeeb has been expanded manifold in term of construction, and purposes. On 27 April 1984 he established the Maulana Okarvi Academy (Al-A’lami). He has established three international organizations; are Sawaad-e-A’zam, Ahle Sunnat Haqeeqee and International Sunni Movement which are non-profit and non-political movements. Branches of these organizations are working internationally. Beside this he manages charities (Sadaqaat-e-Jaariyah) and two organizations for the printing of Islamic books: Karmaan Waalaa Publishers and Noorani Kutub Khaanah. 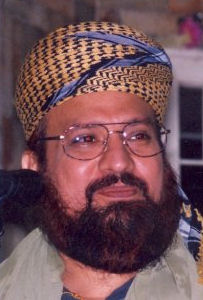 In 1975 he went for the first Umrah and spent a whole month of Ramadan in Medina. In 1976 he performed his first hajj. In 1977 he travelled to India for the first time where he visited many cities, shrines, mosques and gave lectures.

This was the year of centurial celebration of the poet Muhammad Iqbal. Here he was interviewed on All India Radio Urdu service. In 1979 he visited Syria, Jordon, Iraq, Turkey, Egypt, and Saudi Arabia. In 1980 he visited India, the United Kingdom, the United States, South Africa, the Middle East and Australia. In 1990 he again visited the United Arab Emirates to give lectures. These were also broadcasted on the local TV.

In 1990 he visited Mauritius and French Islands La Reunion to give lectures. Here the local radio and television covered his visit. Since then he has often been invited by Muslim groups in different countries to give lectures. It was always his desire to start his journey to any country via Madinah so that he could receive the blessings of Muhammad. Therefore he has visited Madinah more than 50 times.

In South Africa, he revived his father’s mission. Between 1987 and 1991, Okarvi was invited to South Africa six times. During this period, he visited Swaziland, Botswana, Bophuthatswana, Mozambique, Mauritius, Re-union, Lesotho and Zimbabwe. He authored eight books, which were also translated to English.

The series of these gatherings spread, the practice of reciting Durood Shareefin masaajid before and after Azaan was revived, the practice of holding Eid-e-Meelaad-un-Nabee in many parts of these countries was inaugurated for the first time. Branches of Maulana Okarvi Academy (Al-A’lami) were established, Madaaris(religious schools) were set up. Thousands of workers were trained to serve the creed of Ahle Sunnat, many people embraced Islam, the holding of ten-day Muharram commemorative meetings came into vogue in Transvaal, South Africa’s province.

In 1996 he established Jamaa’at Ahle Sunnat in America. He established for the first time many religious schools in many countries. In Pakistan as well as abroad he participated in many educational and religious conferences. He has preached in more than fifty-one countries, including Saudi Arabia, Syria, Jordan, Iraq, Egypt, Turkey, United Arab Emirates, Oman, Kenya, Zimbabwe, Malawi, Re-union, Lesotho, South Africa, Botswana, Swaziland, Mauritius, France, India, Bangladesh, Afghanistan, Europe, Australia and U.S.A. He has visited some of these countries several times. So far hundreds of people have embraced Islam through him.

Views about other sects of Islam

In his book, From Deoband to Bareilly, he wrote: “Even earlier, I was greatly distressed by this thought but lately it increased even more when I visited the African countries. I witnessed this strange phenomenon among the adherents of Islam living in my own homeland and also far away from the homeland that they are after (each other’s throat) their own collars. Why point accusing fingers at others? Even the so-called wayfarers of the road to Madinah, the preachers are changing the truth and truthfulness, and the standard-bearers of peace and security (self-proclaimed) are with their tongues, pens and deeds, disgracing their own Millat and group, their own Masjid and pulpit.”

The book was first published in English by Maulana Okarvi Academy (Al-A’lami) in South Africa and then in Urdu in Pakistan. This book became popular with the public. 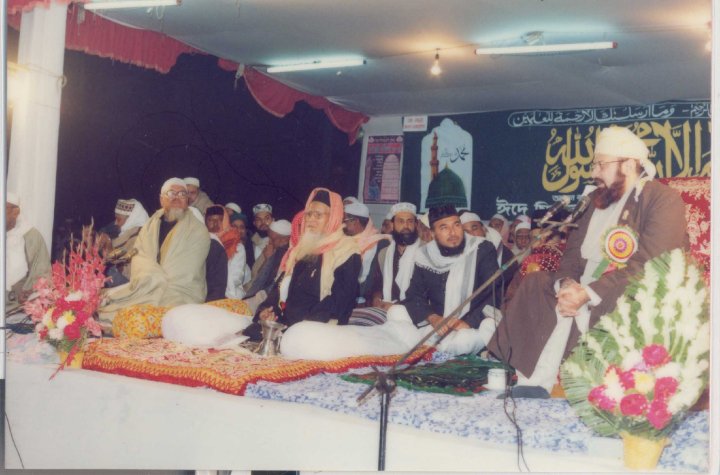 His first love and interest was writing literature. He has been a part-time lecturer but his main concentration was mostly towards research, writing and oration and up till now in the country and abroad over 7000 speeches has been given by him. He is also translating the Quran in English. Since 1988, he has written several books in Urdu and English. The topics of his books include: